We have been a mainstay in the New Orleans area for decades. Joval is a name you can trust and we have the history of work to prove it.

We always deliver top quality parts for all your needs.

We will make the part that fits your project.

Since 1955 Joval has enjoyed serving a very loyal customer base that values quality, consistency, and personal service. Joval was founded by partners John Valenza and Walter Johnson, who combined their last names to come up with the company name.

John Valenza had been working with Walter Johnson in 20th Century Sheet Metal, a company that they started by kicking John’s father’s mule out of the barn. As that company grew in the commercial HVAC market, John’s brothers joined the company. Eventually, John and Walter left that company to start Joval, which would introduce pre-fab metal duct and fittings to the growing residential market in   Louisiana and Mississippi. They built the plant in Jefferson Parish, near the Orleans Parish line on Iris Ave. The plant remains in that location today, although it has had many expansions over the years.

John Valenza served as president of Joval and Walter Johnson was Vice President. Veterans to the industry might remember Emile Oustalet, the original salesman for Joval, who was responsible for the company’s early growth. He was followed by Larry Guilliot, who remained with the company for years.

John, who eventually bought out his partner, also brought his two sons-in-law on board in the late 1960’s. Donald Bourgeois began in the shipping department and worked in many areas of the business eventually becoming Vice President of Sales. He retired in 2006. Francis “Sonny” Hays, Jr. began in the maintenance shop, became the machinist and actually built several of the machines still used in production today. Sonny progressed to Vice President of Production before retiring in 2013, but continues to work with Joval as a consultant. John Valenza, Jr. joined the company in the mid 1970’s and fulfilled various roles in management. He eventually succeeded his father as President of Joval and remains in that position today.

In 2003, a third generation family member, Barry Hays, joined the Joval team as an office staff member, moved to sales and now serves as Vice President. John Valenza III and his brother Jason are also third generation staff members. John III is Director of Operations and Jason works part time as a consultant.

Most recently, Joval hired a new Operations Manager, Austen Lepper, who has lead the production team an all-time high in both productivity and order fulfillment. The experience of our management team contributes greatly to the quality for which Joval products are renown.

Under the current ownership of John, Jr. and Barry, Joval remains a Louisiana based, family owned, homegrown company. Joval is currently focused on expanding into new product lines and improving aspects of existing products. The motto for Joval is “Manufacturing, Delivering, Growing”. This reminds us of our commitment to manufacturing top quality products, delivering excellent customer service, and growing to meet our customers’ needs. 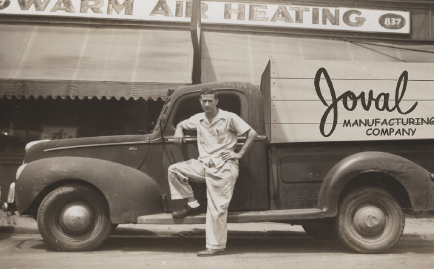